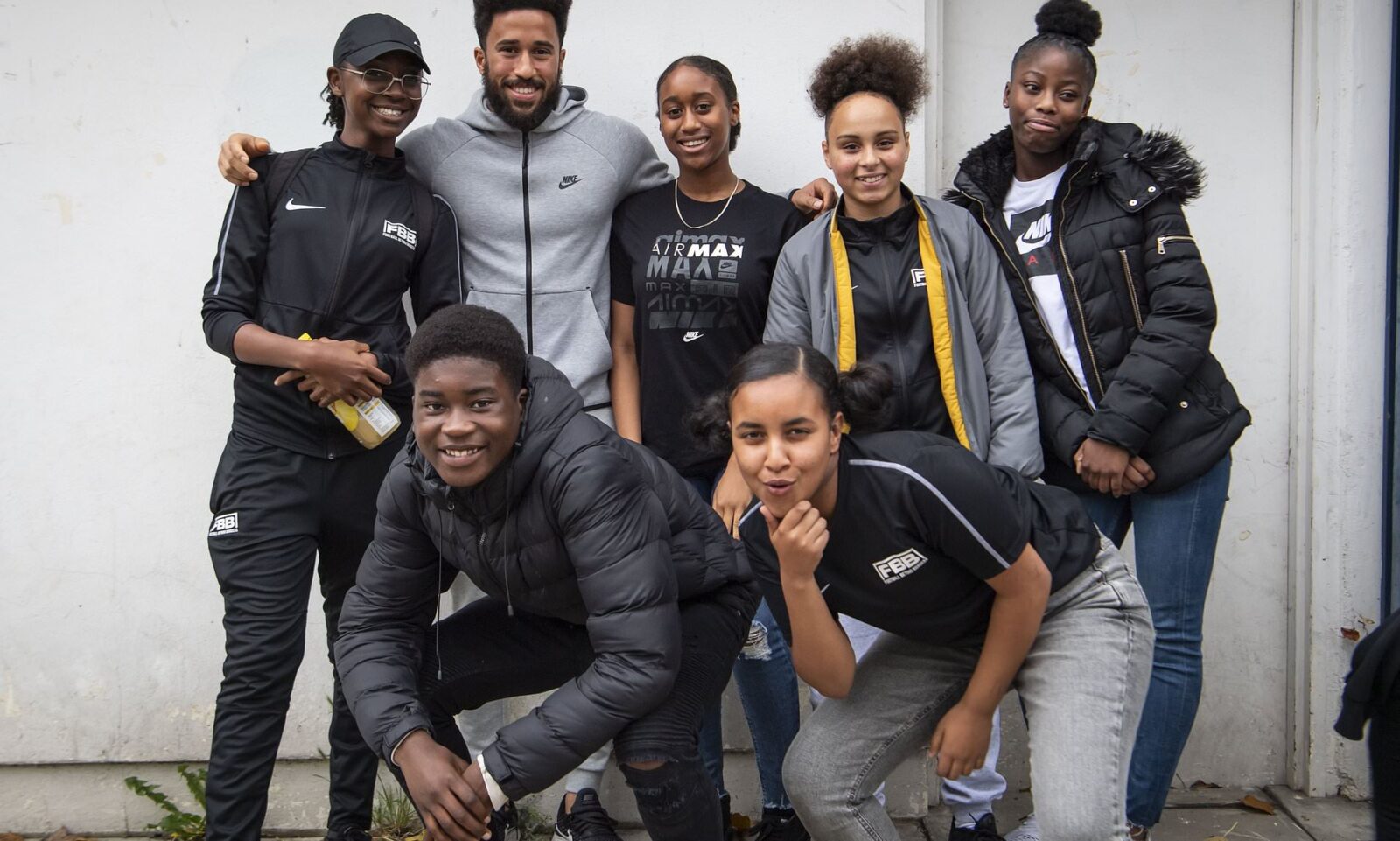 Over the next four weeks, I’ll be showcasing each of the charities I’m supporting in 2020, starting in this post with Football Beyond Borders.

I am convinced that football has the capacity to change lives, and I’ve spoken openly about how football, and supporting Liverpool Football Club, was often the only remaining beacon of hope during my darkest moments.

Having walked the road of mental illness and, at times, homelessness, one of the most precious gifts I have is the opportunity to change lives by honestly sharing my own experiences and, of course, by running and fundraising.

The film below gives an insight to the work of Football Beyond Borders but I promise you that their incredible impact really speaks much more powerfully than words.

On a mission to change lives

When considering the charities I’m going to represent, it’s so important that their values  align with mine. With FBB, I didn’t have to look past the first line of their mission to know that this was the case.

Let’s be frank; I could have stopped at ‘we exist to change the lives of young people’. However, that they are using football as a tool really resonated with me, and I knew I had to further explore.

What matters to me

I’m a dreamer and am on a personal mission to change lives, and those of young people really matter to me. It’s easy to see why there is a synergy with FBB.

For me, Football Beyond Borders represents everything I would want in a charity I’m supporting. FBB resonates with me personally on every level.

I was 16 when I first cried out for help. That help never arrived, well at least not until the age of 31 after 15 years defined by the chaos of mental illness, homelessness and three attempts to end my life.

During this period, notwithstanding the periods of rage symptomatic of Bipolar manic episodes, I was an angry, confused young man. I was vulnerable for all the wrong reasons. As I describe it, I was vulnerable but not being vulnerable.

Olivia Petter perfectly describes the toxic man up culture in this article from The Independent in November 2018.

More than half (61 per cent) of Britain’s young men feel pressured to “man up” as a result of damaging gender stereotypes, new research from YouGov reveals.

According to the findings, 67 per cent of 18-24 year olds felt compelled to display “hyper-masculine” behaviour in tough situations and 55 per cent said crying in front of others would make them feel like less of a man.

It is not a stereotype to state that young men from disadvantaged backgrounds, often dropping out of school, can so easily find themselves in this vicious cycle of toxic masculinity.

John McAvoy is a Nike sponsored athlete but that is a long way from his past as an armed robber who found redemption whilst in prison. His story, alone, emphasises the dangers of being an angry young man without love, without guidance, without someone prepared to invest time and compassion.

He is a patron of the charity and spoke at FBB’s recent showcase event. He is an incredible and generous role model to whom these young people can relate. 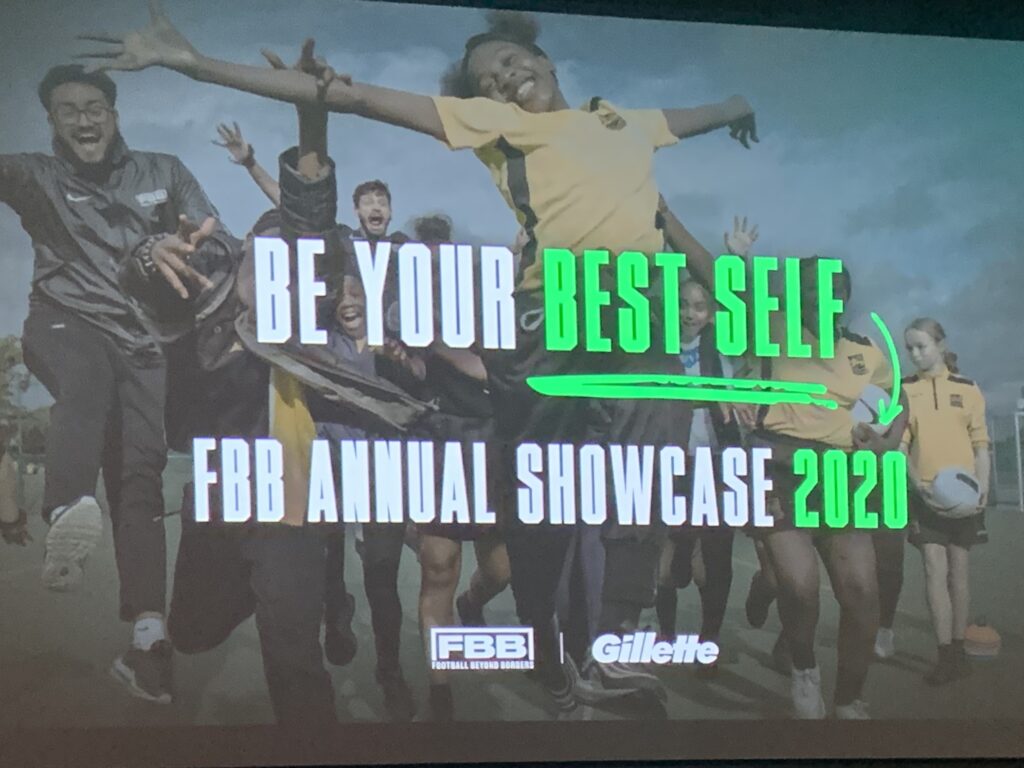 Be Your Best Self

My wife and I were thrilled to recently attend the aforementioned Football Beyond Borders showcase at the Tottenham Hotspur Stadium. It is easy to assume that a small charity means small impact and small actions. Nothing could be further from the truth and I walked away from that evening utterly inspired by the young people who shared their stories and shared the impact of FBB on their lives.

Ian Wright was the special guest at the event, yet when regaling to friends the impact that the evening had on me, he was almost an afterthought. Similarly, John McAvoy’s testimony was moving and hugely powerful but was almost overlooked.

The evening belonged to the brave, courageous and vulnerable young people who led from the front.

In my mental health campaigning and in my career as an HR leader, empowering people to be vulnerable is something that I constantly speak about. It is in being vulnerable that we give ourselves the freedom to truly experience the emotions we are feeling, it is vulnerability which protects us from all the dangers which come from a fight or flight response which benefits us neither physically nor mentally.

Throughout the evening, the recurring theme was of brave young men and women in challenging circumstances, whether at home or school, choosing compassion and vulnerability as their responses due to the wonderful mentoring and role models at FBB.

John McAvoy’s testimony, and role as a patron, provide a real bridge to the work that FBB is doing. This is a programme which is helping young people to fulfil their potential, preventing them from paths that could have the most serious consequences.

This is a charity allowing disadvantaged young men and women to overcome adversity, to redefine stereotypes, to be their best selves. 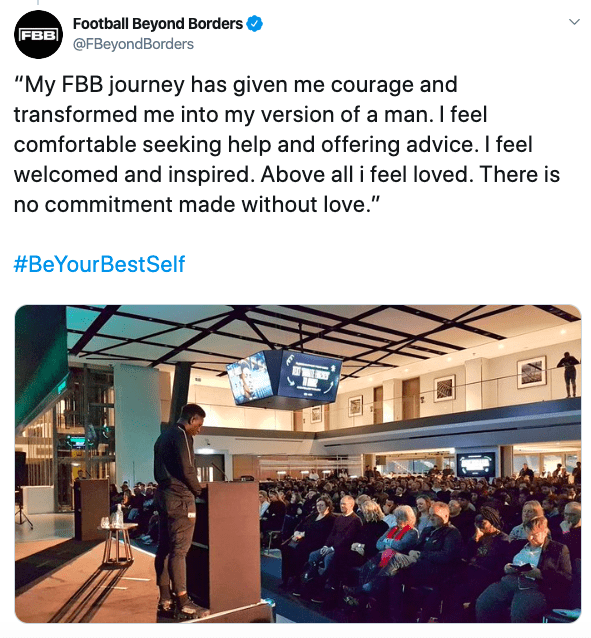 Football is the beginning but not the end

It would be wrong to say that FBB is only there to save youngsters from a life of crime. There is so much more than that.

It would also be wrong to say that FBB is using only football to change lives.

This is about providing love, compassion, support and a family for young men and women, instilling in them life changing values.

It is not just about young men but there is a brilliant programme for young women. It was by meeting Ceylon Andi Hickman, FBB’s Head of Impact and Female Participation, at a Heads Together event that I first encountered this amazing charity. Ceylon’s passion shone through that night and both my wife and I were keen to find out more about this charity using football to change young lives.

She is surrounded by a team of brilliant women at FBB. Naomi Ogbeta is a five-time British Triple Jump Champion, and also an FBB team member. At the showcase, she gave a great assessment of their work with young people in helping them to grow social and emotional skills while having fun playing sports.

And like the boys programme, the girls programme is a huge success, providing young women with a platform to express themselves creatively in the classroom and on the pitch.

In November, FBB collaborated with This Girl Can on The Spirit of the Game, and the inspiring short film below captures this perfectly.

The best a man (or woman) can get

In February, FBB teamed up with Gillette to launch the #MadeOfWhatMatters campaign. The campaign features England international, Raheem Sterling, and strives to embody a message of being proud of who you are and where you come from, and very definitely one of inclusion.

FBB has a core principle on the power and importance of young men looking up to a role model that they can relate to. This is exemplified in the FBB team and is a driver for this campaign.

Sterling is certainly someone to whom many of these youngsters can relate, a young man who grew up in an estate, encountered challenges in his young life, but has achieved success and continues to give back to where he came from.

It says everything about the impact of the charity and its mission that it is able to attract corporate partners like Gillette and international footballers who absolutely support their work in schools and communities. 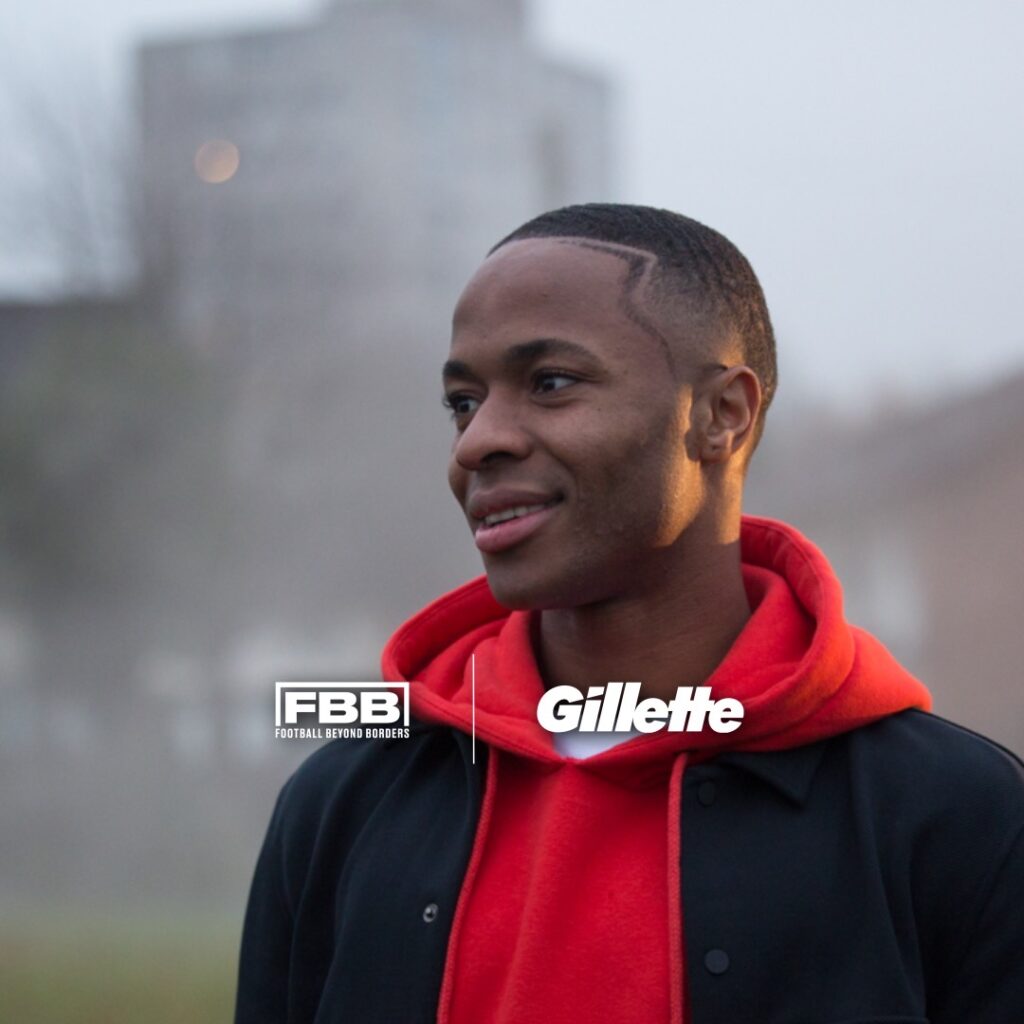 What makes a man

What I’ve written about in this post is merely the tip of the iceberg of what Football Beyond Borders means to the young people, schools and communities that they are transforming.

600 people attended the showcase event in February and I suspect none avoided tears when a young man by the name of Gui presented his story. Gui features in FBB’s What Makes A Man magazine in August 2019 and belies his young age, saying:

What you would not know, reading those words is that Gui tragically lost his mum in July of 2019.

There are countless reasons to support and champion the work of Football Beyond Borders, and I could not be prouder in having them as one of my partners for my #20in2020 challenge.

And if you need any convincing, which I doubt, I leave you with the short film which left me asking my wife for a tissue because I obviously had something in my eye at the showcase event! It was emotional stuff!

In the words of the campaign with Gillette, Gui is definitely made of what matters.

You can donate to the #20in2020 campaign by visiting my Virgin Money Giving page.

You can subscribe to updates and my newsletter on the challenge and fundraising.